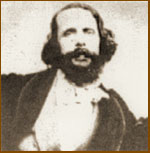 Percy  began his career when his elder brothers were already established; his style owes more to H J Boddington than Edward Williams.  Percy’s very early paintings were signed “Sidney William”s but Percy was only 20 when he adopted the use of “Percy” as the name under which his paintings were to achieve a greater popularity than those of any other member of the Williams family.

When Percy married in 1863, he and his new family settled in Buckinghamshire. Their Regency home, Hill House was ideally placed for the study of the English wooded landscape, as it looked across the Misbourne Valley to the beech woods and beyond. Percy reached the peak of his popularity as an artist during the years he spent at Hill House and was able to support the extravagant  tastes of his wife - maintaining a carriage and employing an army of servants. The Percy family  left Buckinghamshire after the death of their two elder children, and moved to Redhill, and then to Sutton in Surrey.
In the Autumn of 1865 Percy visited Venice, returning home through Switzerland and Paris.  No further foreign travel was possible, owing to the outbreak of war between Prussia and Austria the following year. In spite of this trip abroad it was the Welsh landscape that inspired and moved S R Percy.  Percy was particularly fond of the villages of Llanbedr and Arthog, which are situated on either side of the Mawddach estuary in Merioneth.
Sidney Richard Percy died in 1886.