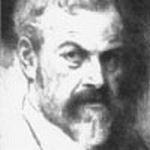 Born into a famous family of artists, and the son of the well-known historical portrait painter Friedrich Kaulbach, Friedrich August von Kaulbach was taught to paint at an early age by his father in Dierdorf before being sent away to receive tutelage from Karl Raupp at the Ecole des Beaux Arts of Nuremberg. In 1872, he was mentored by Wilhelm von Diez at the Munich Academy of Art. In 1873 he moved to Italy and lived there for ten years before moving to Paris in 1883. He exhibited regularly in Paris from 1878 through 1889 and participated in the Universal Exhibition of 1900 in Paris. He obtained medals of excellence in Berlin, Munich, and Vienna, and was named a member of the Munich Academy, and the Academy of Berlin. In 1888 he succeeded the highly-regarded German realist historical painter Karl Piloty as head of the Munich Academy. There is a Kaulbach Museum in Arolsen and in many towns in Germany there are Kaulbach Streets and Kaulbach Places and Squares in honor of Friedrich and the other artists in the Kaulbach family.