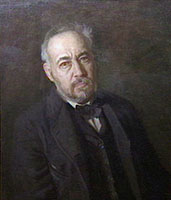 BORN in Philadelphia in 1844, Thomas Eakins is one of America's few indisputably great painters. His friend Walt Whitman the subject of a splendid 1888 portrait by Eakins insisted that he was not so much a painter as a "force": high praise from the cosmic bard. Today, many critics conclude that Eakins's later portraits searingly frank yet also gentle, respectful, affirmative have earned him a place alongside such 19th-century masters of psychological realism as Courbet, Manet, and Degas.

The comprehensive exhibition of Eakins's work now [2001] up at the Philadelphia Museum of Art that includes some 200 objects amply confirms that judgment. The son of a writing master, Eakins from the beginning pursued his art with a deliberate, workmanlike mastery of craft. He once said that the studio of his friend William Merritt Chase was an "atelier" whereas his own studio was a "workshop."

Eakins's passion for exactness and technical precision is evident throughout his oeuvre, from the perspectival and anatomical studies he did as a student through his meticulous paintings of boaters and other sportsmen to his late experiments in serial photography (on some of which he collaborated with Eadweard Muybridge). It is no accident that some of Eakins's most famous pictures are of men of science, especially surgeons.

Like all genuinely original artists, Eakins was deeply traditional. That is to say, his originality issued from his fertile assimilation of certain artistic conventions and techniques. In 1866, after studying briefly at the Pennsylvania Academy of Fine Arts, Eakins departed for Paris, where he studied with Gerome at the Ecole des Beaux-Arts. Excursions to Madrid and Seville brought him into contact with the work of Velazquez and Ribera, the two old masters whose tenebrist palettes and unflinching exploration of character most decisively influenced the aesthetic temperature of his work.

Because Europe was the inescapable source of artistic tradition in the 1860s, Eakins apprenticed in Paris. But unlike such popular society portraitists as John Singer Sargent, who became a professional expatriate in London, Eakins found his vocation as a distinctively American painter. "If America is to produce great painters," he wrote late in life young artists should "remain in America to peer deeper into the heart of American life." In 1870, Eakins returned to Philadelphia, never to set foot in Europe again.

It was in the matter of peering "deeper into the heart" that Eakins differed most profoundly from painters like Sargent and Chase, whose slick technique and tendency to flatter their clients made them both rich. Eakins never flattered his sitters. His art is a masculine art: unfussy, blunt, direct. He preferred to explore the truth of what he saw, which is not to say that he did not discover beauty or dignity in his contemplation. Some of his portraits, The Concert Singer (1890-92) and Maud Cook (1895), for example are positively ravishing; none lacks dignity.

Yet the critic who observed that Eakins was an "annihilator of vanity" was right. Even when he preserves a facade, Eakins glimpses the human melancholy behind it. Many clients complained that he made them look older than they were. In fact, Eakins painted very slowly and tended not to talk much while painting; this often lulled his sitters into a meditative repose, bereft of the rejuvenating sparkle that full attention brings. Some of his most penetrating portraits of his wife (1900), of the singer Edith Mahon (1904), of his friend Amelia Van Buren (1891) discreetly exploit tokens of aging to suggest the pathos of mortality.

All this made Eakins a specialty taste. Although respected by other artists and a handful of critics, he never had a wide following. Consequently, many of his portraits are of friends, family, or students. There was also some mild scandal. In 1886, for example, when he was director of the Pennsylvania Academy of Fine Arts, Eakins sought to illustrate a point of anatomy by removing a loincloth from a male model in a drawing class in which female students were present; he was promptly dismissed.

Nor did his unsentimental treatment of certain subjects recommend him to established taste. The surgeon's bloodspattered hand in The Gross Clinic (1875) led the squeamish jury to reject it as "unsightly" when it was first exhibited at the Centennial Exhibition of 1876. The painting one of Eakins's most famous was finally sold to a medical school for the insulting sum of $200. In 1894, an embittered Eakins wrote that "My honors are misunderstanding, persecution, and neglect, enhanced because unsought."

It was not until the early 1900s that Eakins began to attract significant public interest. In 1902, when he was in his late 50s, he was finally invited to join the National Academy of Design. He painted a bust length self portrait as a "diploma picture" to mark the occasion. A preparatory oil sketch, which Eakins completed in a single session, shows him head on, half swallowed by shadows. Everything below the neck is lost in a scumbled darkness. The artist's face is full of weary sadness, resigned but unconquered. In the finished portrait, Eakins brought himself forward into a warm, invigorating light and accoutered himself in coat and tie. His head is cocked to the right, his gaze is even, sure, assessing. The sadness is still there, but so is a dignified humanity.

It is instructive to contrast Eakins's portraits with those of such 20th century stars as Francis Bacon and Lucian Freud. In a curious way such painters have become the Sargents of today: facile purveyors of expected images to the chic and well connected. The difference of course is that establishment taste is now cheerfully "anti-establishment." While Sargent idealized his subjects, painters like Bacon and Freud diminish them. Bacon systematically smudged and distorted the faces of his sitters; Freud saddles them with a ghastly dermatological emergency. The announced intention of these procedures is greater honesty and psychological depth; they are supposed to be keys to authenticity, revealing humanity in all its wretchedness if not, indeed, its depravity. But the result is a dehumanizing art that depends for its effect on a handful of visual cliches.

As this fine exhibition demonstrates, Eakins's art towers above art world fads: It is the real thing, a permanent cultural possession and sustaining inspiration.