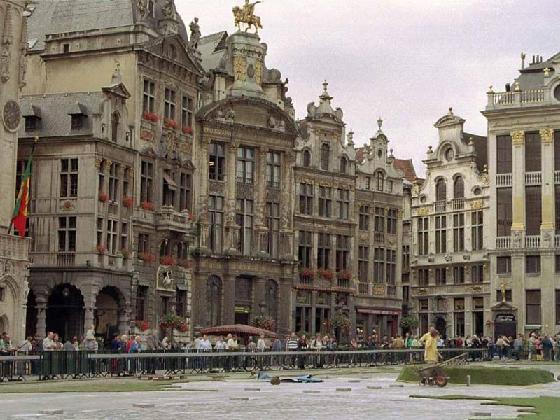 Most prominent member of the Classic Fine Art who originated from Belgium was Sir Antony van Dyck. In the 18th cent. French rococo taste predominated in Flanders, but in the 19th cent. a flourishing Belgian school of romantic painters arose . They included Gustave Wappers, Hendrik Leys, and the genre painter Henri de Braekeleer (1840-88). Two other noted Belgians, Alfred Stevens and Henri Evenepoel, worked chiefly in Paris.

A number of Belgian artists stand out as exemplars of modern Belgian fine art. Foremost is James Ensor, an individualistic painter of grotesque personal visions whose major works were created by 1900. Important belgian artists of the 20th cent. include the founders of Belgian expressionism, Jakob Smits and Eugene Laermans; the sculptor and painter Rik Wouters and later expressionist painters Frits van den Berghe and Constant Permeke; the internationally recognized exponents of surrealism Paul Delvaux and René Margritte; and the later painters of the abstract school Anne Bonnet and Louis van Lint. Victor Horta and Henri van de Velde are the major 20th-century Belgians architects.

Victor Baron Horta-1861–1947, was the architect of the Tassel House in Brussels (1892-93). This first mature work, was the earliest monument of art nouveau. It was excelled only by his later works, such as the Baron von Eetvelde house (1895) and the demolished Maison du Peuple (1896-99), both in Brussels. The houses are especially significant for their interior architecture. The irregularly shaped rooms open freely onto one another at different levels. The plantlike design of the iron balustrade is echoed in the curving decorative lines of the mosaic floors, plaster walls, and other surfaces. Horta later reverted to a more traditional mode of architectural expression.

Belgian modern fine art was created from the 19th cent. to the mid-20th cent. by artists who veered away from the traditional concepts and techniques of painting, sculpture, and other fine arts that had been practiced since the Renaissance. Nearly every phase of modern art was initially greeted by the public with ridicule, but as the shock wore off, the various movements settled into history, influencing and inspiring new generations of artists.