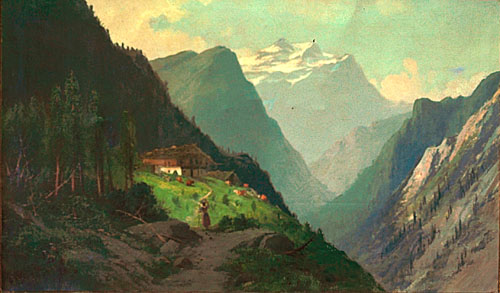 The emergence of individual artists heralded the Renaissance: Konrad Witz from Rottweil in the Black Forest painted the first authentic Swiss landscape paintings in 1444. Urs Graf (approx. 1485-1527) from Solothurn accompanied the Confederates on their military campaigns, and his drawings record the misery on the battlefields with a sharp sociocritical eye. Hans Holbein the Younger (1497-1543), Switzerland's most important Renaissance artist, produced most of his work in Basle. At the time of the Reformation, however, he left the city because of lack of commissions for his work and went to live in London. Johann Heinrich Fuessli (1741-1825) was another artist who moved to London, where he had a successful career.

Swiss Baroque can be characterized by a few landmarks: the architects of the Ticino, Catholic churches, and the monasteries of Muri, Rheinau, Disentis, Einsiedeln and St.Gall. Carlo Maderno, Francesco Borromini and Domenico Fontana were important figures in seventeenth-century architectural history who did most of their work in Rome.

Swiss portrait painting experienced a golden age in the eighteenth century with Jean-Etienne Liotard from Geneva and Anton Graff from Winterthur.

Frank Buchser from Solothurn (1828-1890) painted political and military personalities in America, taking a special interest in the lives of Native and African Americans.

Prominent artists from the 19th cent. are Antonio Ciseri and Robert Zund, who explored religious themes and left outstanding works, such as Ecce Homo [Behold the Man] and "Road to Emmaus". Others include Bernese Albert Anker (1831-1910), with his idyllic paintings of rural life, and Arnold Boecklin from Baste (1827-1910), with his mythological and fantastic paintings. Ferdinand Hodler's (1853-1918) monumental figures and mountain landscape paintings are among the most beautiful and inimitable examples of Swiss fine art.

The Giacomettis, a family of artists, originated from Bergell in the canton of Graubuenden; its most famous member, the sculptor Alberto Giacometti (1901-1966), achieved international renown in Paris. Among the modern classics are Paul Klee (1879-1940) and the main representatives of the Zurich movement of 'concrete artists', Richard P. Lohse (1902-1988) and Max Bill (born 1908).

A few names must suffice to represent the various branches of applied art: the tapestries of Elsi Giauque are famous far beyond the borders of Switzerland, as are the ceramics of Edouard Chapallaz. Le Corbusier (1887-1965) is an outstanding figure in twentieth-century architecture, and recently the work of the Ticino architect Mario Botta has exercised a great influence.