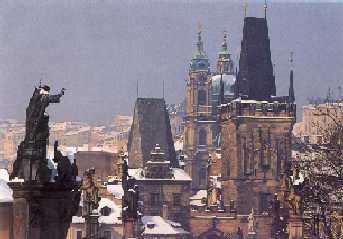 The newly founded Prague Academy (1800), promoting Classicist principles, decides to revive the art of painting in the Czech lands. The Academy created a new tradition from which the work of F. Tkadlik, A. Machek, Anthony, Joseph and Quido Manes emerged. The duo of J. Manes represents national fine art and is followed by the so-called generation of the National Theatre; the local colour and realism are discernible in the works of Victor Oliva, J. Navratil and K. Purkyne. The Czech artists J. Cermak, K. Purkyne, Sobeslav Pinkas (1827-1901) and Viktor Barvitius (1823-1901) enter into contacts with Western artists, mainly with the French ones.
The decoration of the National Theatre is a great challenge for the young generation of Czech artists; painters of different styles and temperament - V. Hynais, V. Brozik, Francis Zenisek (1849-1916), J. Marak, Joseph Tulka (1846-1882) and M. Ales – gather for this purpose. The greatest Romanticist and the author of fairy-tale motifs is Hanus Schwaiger (1854-1912). The development of Czech landscape painting of the 19th century represented by Charles Postl (1769-1818), A. Manes, A. Kosarek, J. Marak, A. Chittussi results in the works of Marak’s followers A. Slavicek and Anthony Hudecek (1872-1941), who reach individual impressionism. Realistic landscape painting is represented by Francis Kavan (1866-1941), Aloysius Kalvoda (1875-1934), Charles Englmüller(1872-1950), Ulric Blazicek (1887-1953) and others.
Czech painting and graphic arts reach the world level again due to the representatives of Art Nouveau and Symbolism of A. Mucha