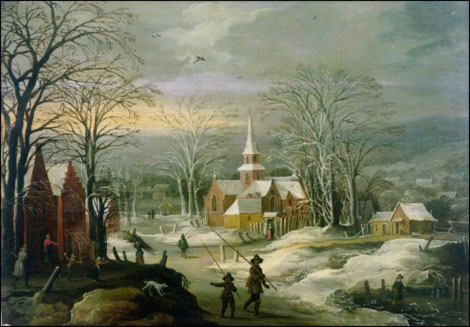 In general, with the exception of the brilliantly original Pieter Bruegel, the elder, late 15th-century Flemish fine art followed Italian models, although it preserved interest in genre realism and landscape painting as seen in the works of Paul Brill, Gillis van Coninxloo, and others.

With Rubens, Flemish fine art again became preeminent in Europe, and his influence dominated painting throughout much of the 17th cent. The greatest patron of Flemish art remained the church, and Rubens's greatest influence was exerted through his religious paintings rather than his portraiture or his apotheoses of European rulers. Elements of his energetic line, brushwork, and understanding of form, his rich, warm color, and his ideal of robust beauty were emulated in the work of his pupil Jacob Jordaens and in that of his more consciously elegant and more highly individual follower Sir Anthony Van Dyck.

Toward the middle of the 17th cent. there was increased interest in the rendering of homely domestic scenes and views of urban life, seen in the paintings of Pieter de Hooch, Gabriel Metsu, and Jan Steen. In the 1660s and 70s taste began to favor effects of wealth, elegance, and refinement. A tranquility of atmosphere pervaded not only works of lesser flemish artists but also the exquisite paintings of Gerard Ter Borch and Jan Vermeer

Landscape also became an enormously popular subject, offering full scope to the native tendency toward pictorial realism. The flemish artists depicted their countryside with a sensitivity and unpretentious sincerity that has made the Dutch school of landscape one of the most influential and esteemed of all time. Rembrandt's genius was expressed in the whole gamut of subject matter, from portraiture, landscape, and interiors to still life and historical scenes.

In the second quarter of the century the landscapes of Jan van Goyen and Salomon van Ruisdael reveal a greater breadth of space and more dynamic composition. The culmination of these tendencies was reached in the art of Jacob van Ruisdael, Aelbert Cuyp, and Meindert Hobbema and in that of the great specialists in marine views, Jan van de Cappelle, Willem van de Velde, and Ludolf Backhuysen. Certain landscapists emphasized animal painting  or concentrated on unusual light effects in sunsets and moonlight scenes.