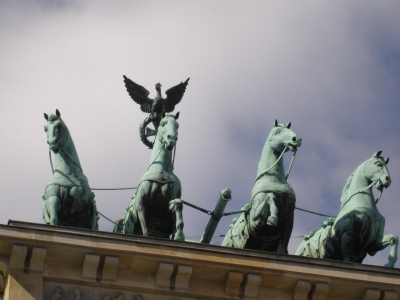 Painting in the 16th cent. placed at the top in Germany Fine Art and led all other arts. Hans Holbein the younger, Mathias Grunewald (creator of the last major Gothic altarpiece), Albrecht Altdorfer (who brought pure landscape painting into vogue), Lucas Cranach the elder, and Hans Baldung (all German Artists) were the great masters of the age.

Ceiling decoration was widely practiced. The rococo style came to the fore c.1730, with the Tischbein family and Angelica Kauffmann its chief exponents in painting. At this time, too, small Dresden china figures and groups became very popular, with the workshops at Meissen producing exquisite miniature statuettes of genre subjects. A. R. Mengs's work marked the widespread revival of classicism modeled on the theories of J. J. Winckelmann and on the art of Rome. Meanwhile, the monumental sculptures of J. G. Schadow were regarded as the model for a century of subsequent German plastic fine art.

In the late 19th cent. a new wave of romanticism emerged in Germany Fine Art that had been foreshadowed by the desolate landscapes of C. D. Friedrich and the complex allegories of P. O. Runge. Romanticism was exemplified in the architecture painting of K. F. Schinkel.