View of Warsaw from the Royal Palace, 1773 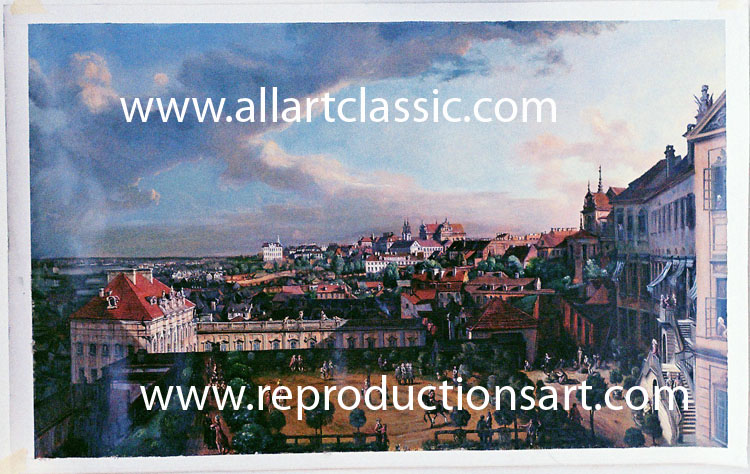 OIL PAINTING:  View of Warsaw from the Royal Palace, 1773       When Bellotto arrived in Warsaw in 1766 on his way to Saint Petersburg, Stanislaus II August Poniatowski, the new King of Poland, offered him a position as painter at the Polish court. Bellotto accepted the offer and sent for his wife and children (who were still in Dresden) to join him in Warsaw, where he spent the last fourteen years of his life. Bellotto's most important work from this period is a series of twenty-six views of Warsaw, intended for the entrance to the royal suite of the palace, which was called "Canaletto Hall", after the painters assumed name. The views show locations related to the life of Poniatowski or containing allusions to the King's illustrious predecessors. They were grouped around a painting by Bellotto that showed the election of Poniatowski as king of Poland. The large View of Warsaw from the Royal Palace, one of the most impressive works from Bellotto's later years, did not belong to this group. Probably it was intended for the King's private apartments.
In the painting View of Warsaw from the Royal Palace one looks toward the South, along the wall of the Royal Palace on the right. A monumental staircase gives access to the royal suite on the first floor. This staircase, designed in 1773, the year in which the painting was made, was never actually built. In front of the palace the terrace on the Vistula can be seen. Both on the staircase and the terrace the spectator's attention is attracted by numerous small figures. In the middle of the terrace there is a riding school, with a young man receiving a riding lesson, and on the right a sculptor's workshop is seen. The lighted Lubomirski Palace below the terrace on the left forms the transition to the middle distance.
In the upper right of the painting of Bellotto , churches and palaces are shown rising along the street called the Krakowskie Przedmiescie, or the Cracow Suburb. These buildings had a special significance to the monarchy and the street itself linked the palaces outside the city, Wilanow and Ujazdow, to the palace in the city. Thus, the street had turned into a Warsaw Via Sacra or Rue Royale. From right to left we see, inter alia. Saint Anne's Church, directly behind the palace; the church of the Carmelites; the two towers of the church of the Holy Cross; the Radziwill Palace and the church of the Sisters of the Visitation. In the middle of the scene are the buildings on the slope leading down to the Vistula and below that on the far left the river itself, with the small wooden cottages in the hamlet of Powisle huddled on its bank. To the left of the centre background stands the white Kazimierzowski Palace, the main building of the military academy.
This canvas - View of Warsaw from the Royal Palace is highly successful in its rendering of an attractive, sweeping panorama; the blue sky, the long shadows and the light from the west which casts an orange glow over the scene are suggestive of a warm spring or summer evening. The various elevations in the painting, which leap from front to back and rise gradually from left to right, contribute to the illusion of space. The buildings along Krakowskie Przedmiescie Street rendered in an interesting alterations of lighted and shaded elements, create a strong sense of depth. By means of perspective and light the artist has ensured that the spectator's eye finally is directed to the gleaming white building of the military academy in the distance.
The View of Warsaw from the Royal Palaces the last large town view painted by Bellotto. By this point the staffage had developed into an element of no less importance than the architecture. The painting attests magnificently to the artistes capacities, and constitutes a brilliant culminating point in Bellotto's oeuvre. Moreover, it marks a final stage in the development of topographical painting.