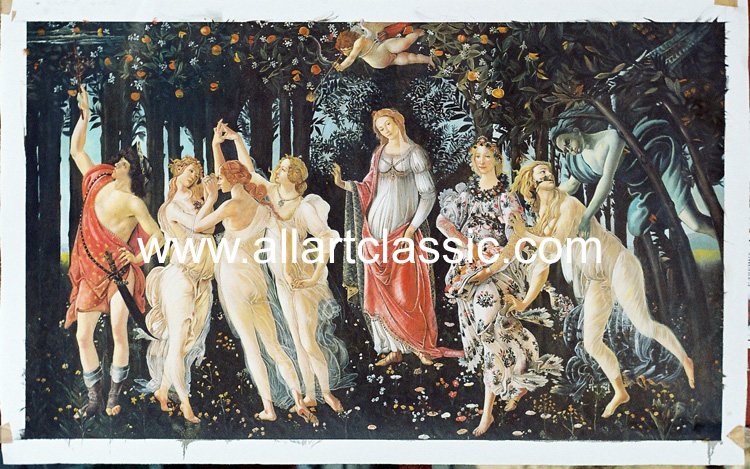 shipping information
OIL PAINTING:  La Primavera [Allegory of Spring], 1477-1478       Such large format paintings like La Primavera [Allegory of Spring] by Botticelli were nothing new in high-ranking private residences. The Primavera is, however, special in that it is one of the first surviving paintings from the post-classical period which depicts classical gods almost naked and life-size. Some of the figures are based on ancient sculptures. These are, however, not direct copies but are translated into Botticelli's own unconventional formal language: slender figures whose bodies at times seem slightly too long. Above all it is the women's domed stomachs that demonstrate the contemporary ideal of beauty.
Botticelli depicts Venus , standing in the centre of the painting, set slightly back from the other figures. Above her, Cupid is aiming one of his arrows of love at the Three Graces, who are elegantly dancing a roundel. The garden of the goddess of love is guarded by Mercury on the left. Mercury, who is lightly clad in a red cloak covered with flames, is wearing a helmet and carrying a sword, clearly characterizing him as the guardian of the garden. The messenger of the gods is also identified by means of his winged shoes and the caduceus staff which he used to drive two snakes apart and make peace; Botticelli has depicted the snakes as winged dragons. From the right, Zephyr, the god of the winds, is forcefully pushing his way in, in pursuit of the nymph Chloris. Next to her walks Flora, the goddess of spring, who is scattering flowers.
Various interpretations of the scene , displayed by Botticelli exist. Leaving aside the suppositions there remains the profoundly humanistic nature of the painting, a reflection of contemporary cultural influences and an expression of many contemporary texts.
One source for this scene is Ovid's Fasti, a poetic calendar describing Roman festivals. For the month of May, Flora tells how she was once the nymph Chloris, and breathes out flowers as she does so. Aroused to a fiery passion by her beauty, Zephyr, the god of the wind, follows her and forcefully takes her as his wife. Regretting his violence, he transforms her into Flora, his gift gives her a beautiful garden in which eternal spring reigns. Botticelli is depicting two separate moments in Ovid's narrative, the erotic pursuit of Chloris by Zephyr and her subsequent transformation into Flora. This is why the clothes of the two women, who also do not appear to notice each other, are being blown in different directions. Flora is standing next to Venus and scattering roses, the flowers of the goddess of love. In his philosophical didactic poem, De Rerum Nature the classical writer Lucretius celebrated both goddesses in a single spring scene. As the passage also contains other figures in Botticelli's group, it is probably one of the main sources for the painting: "Spring-time and Venus come,/ And Venus' boy, the winged harbinger, steps on before,/ And hard on Zephyr's foot-prints Mother Flora,/ Sprinkling the ways before them, filleth all/ With colours and with odours excellent."