Return of the Bucentoro to the Molo on Ascension Day, 1732 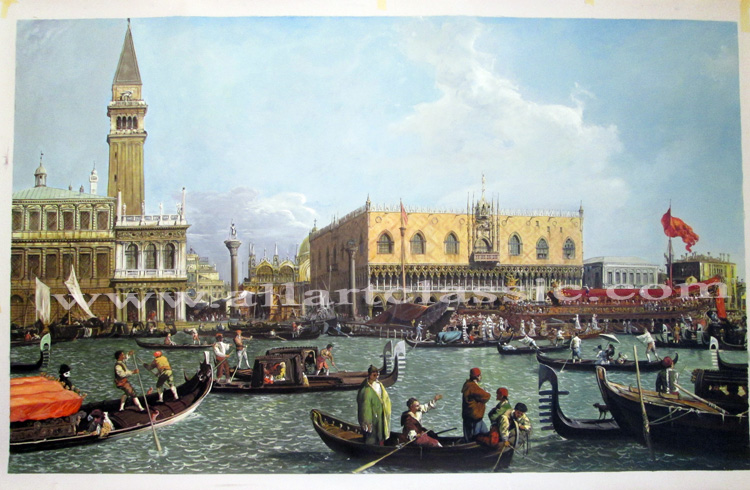 OIL PAINTING:  Return of the Bucentoro to the Molo on Ascension Day, 1732       The picture Return of the Bucentoro to the Molo on Ascension Day, showing traditional Venetian ceremony is from a series of 14 views of the Grand Canal painted by Canaletto and engraved by Antonio Visentini (published in 1735).
The historical power of the Venetian Republic was dependent upon its mastery of the sea, both for trading and military purposes. Such dominance had waned by the eighteenth century, but past glories were symbolically recalled in ceremonies, such as the one depicted in Return of the Bucentoro to the Molo on Ascension Day.
Here, a naval victory over Dalmatia which took place in 998 AD, apparently on Ascension Day, is commemorated. During the event the Doge travelled in the Bucintoro, the golden barge, out into the Lido, where he cast a ring into the sea, as a symbol of the marriage or union between Venice and the Adriatic. Such a ring had been given to a twelfth-century Doge by the Pope in gratitude for his peacemaking.
The massive barge, designed by Stefano Conti and the last to be built before the fall of the Republic, has just returned from the Lido. The spectacle it creates, with its huge, brilliant orange flag fluttering before the sky, was clearly one that appealed to Canaletto. It is perhaps the archetypal Venetian scene, combining as it does elements of beauty, showiness, symbolism, and sheer delight in the physical appearance of the city.

Watch video sample of our reproduction of this Canaletto Painting