Board of Trustees of the National Museums and Galleries on Merseyside (Lady Lever Art Gallery, Port Sunlight) 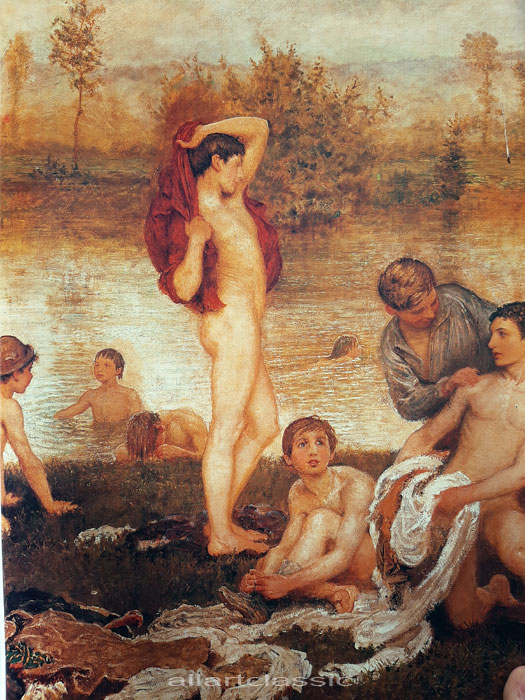 OIL PAINTING:  Bathers, 1867 Walker intended Bathers as a major statement. Although ostensibly a piece of realism, showing a naturalistic scene of youthful pleasure, it also refers to a classical precedent, quoting Antique sculpture for the figures, and in overall distribution recalling Michelangelo's Bathers. The background was painted in the open air, at a spot the painter found on the Thames near Cookham, working on the canvas over some considerable period. The transport of a six-foot picture by train from London and cross-country to the river caused him regular logistical stress, as did the inclement weather he frequently reports in his letters. The figures were added in his London studio, although he also brought one boy to Cookham to model in situ. This ambitious, compositionally complex work clearly taxed Walker, and he sent it unfinished to the 167 Royal Academy exhibition, where its overworked surface was noted but accepted. He continued working on it throughout 1868, and made minor changes the following year when it was bought from Agnew's by William Graham. An avid patron of the nude, Graham paid the large sum of 1,050 Pounds. However, the central seated boy with his legs apart, based on the Barbarini Faun, caused embarrassment for Graham, whose evangelical friends in London objected to it. Through his friendship with Walker, and the arbitration of the Revd Samuel Martin, minister to the Congregational chapel in Buckingham Gate where Graham worshipped, the artist was persuaded to introduce a towel to cover the boy's genitals. Critical responses to the picture at its RA showing were distinctly mixed. Although Walker's biographer, his brother-in-law John George Marks, listed many favourable comments, others were less generous. The Art Journal asked: "Why in the name of all the arts, it may be asked, should Frederick Walker have painted The Bathers? There are some pictures it were hard for even genius to justify. That no ordinary talent presides over this repulsive production few will deny ... opaque and muddy ... The picture shows French influence.