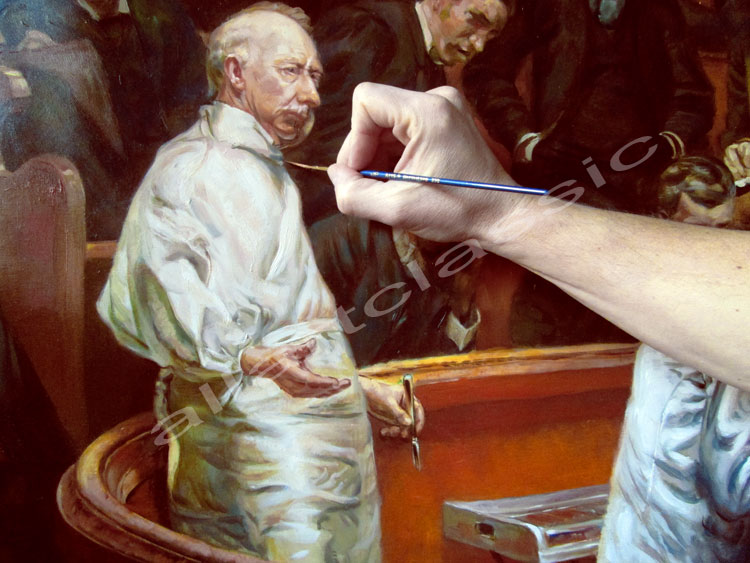 shipping information
OIL PAINTING:  The Agnew Clinic, 1889 The Agnew Clinic by Eakins was commissioned by Dr. D. Hayes Agnew's students at the University of Pennsylvania to celebrate the seventy-year-old physician's retirement as Professor of Surgery in 1889. It was unveiled at commencement 1 May 1889. The size of the painting, the largest Eakins ever created, is 84 3/8 x 118 1/8 inches. The artist painted the work in ninety days and received a fee of $750. Its frame carries this inscription in Latin: The most experienced surgeon, the clearest writer and teacher, the most venerated and beloved man.

Dr. Agnew (1818-1892), a Pennsylvania native, was a well-respected surgeon and educator who had served in two army hospitals during the Civil War. He was best known for his competence in removing bullets, but Eakins has chosen to show him performing a lumpectomy or partial mastectomy.

The surgeon is shown standing in an enclosure, having stepped back from the operation. He is lecturing to students, faculty, and spectators seated in the operating theatre. Dr. Agnew holds a scalpel in his left hand. He is wearing a white surgical gown.

Eakins has placed the operating table with the female patient in front of Dr. Agnew. Her hair and face are visible, the ether cone just above her chin. Her right breast and arm are shown; the left breast is being operated on. A sheet covers her lower body. The sheet beneath the patient carries the inscription: University of Pennsylvania. Between Dr. Agnew and the bed we see a closed case holding the sterilized instruments. The anesthesiologist and the surgeons all wear white. Dr. Agnew's nurse, Mary Clymer, stands by the patient's waist. She is dressed in a high white cap, white apron and black dress.

Eakins illuminates Dr. Agnew, the patient and her doctors, and the nurse. The spectators sit in semi-darkness, but they are individualized by face and posture. The painting contains about thirty small portraits of doctors. Most of the doctors and spectators have been identified by name.Eakins is standing to the extreme right, listening to a doctor who whispers to him. Because of time constraints, Eakins's mini portrait was painted by his wife, the artist Susan Macdowell Eakins. Commentary This painting is always compared to "The Gross Clinic" by Eakins (see annotation). It was painted fourteen years after the former, and offers a completely different perspective on the medical profession. Dr. Agnew adheres to asepsis and wears white, in contrast to the black suit worn by Dr. Gross. Dr. Agnew's scalpel and clothes show little or no blood, at the surgeon's request. The fear and violence depicted in The Gross Clinic have given way to detachment and professionalism.

Though well received by Agnew and his students, the painting, when shown at the Chicago World’s Columbian Exhibition in 1893, met with this review:”It is impossible to escape from Mr. Eakins’s ghastly symphonies in gore and bitumen. Delicate or sensitive women or children suddenly confronted by these clinical horrors might receive a shock from which they would never recover”