Landscape with Aeneas at Delos, 1672 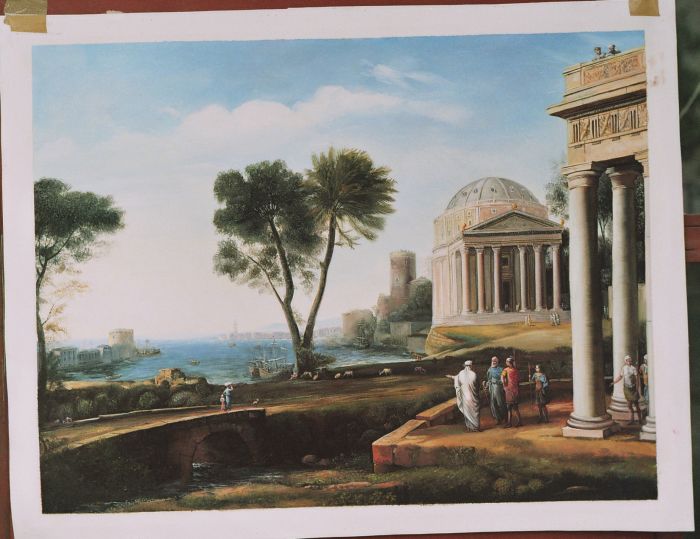 OIL PAINTING:  Landscape with Aeneas at Delos, 1672       In the last ten years of his life Claude Lorrain painted six stories of Aeneas, hero of Virgil's Aeneid - the Latin epic describing the legendary origins of Rome. The theme seems to have been suggested by Claude himself. He chose scenes which had never been illustrated before; they do not form a series, nor were they painted in the order in which they appear in the Aeneid. As if echoing Virgil's 'I am that man who in times past tuned my song on the slender reed [of pastoral poetry]', Lorrain turned, at the age of 68, to sing the voyages of the survivor 'fated to be an exile...the first to sail from the land of Troy and reach Italy'. These six Aeneas pictures, of which Aeneas at Delos is the first, represent Claude's most personal achievement, attaining a nobility of style visually equivalent to the grandeur of Virgil's poem.
Throughout the 1640s and 1650s Claude Lorrain had often illustrated Ovid's Metamorphoses, and it may be through the Metamorphoses that his interest in Aeneas' adventures was first aroused. In Book XIII Ovid relates the hero's flight from burning Troy; Claude's painting is based more closely on this passage than on Virgil's description in Book III of the Aeneid. Ovid tells how - taking with him sacred images of the gods, his father Anchises (the bearded man in blue) and his son Ascanius (the child on the right) Aeneas (in short red cloak):
set sail...and...reached with his friends the city of Apollo [Delos]. Anius [in white on the left], who ruled over men as king and served the sun god as his priest, received him in the temple and his home. He showed his city, the new-erected shrines and the two sacred trees [olive and palm] to which Latona had once clung when she gave birth to her children [Diana and Apollo].
The stone relief atop the portico in the foreground of Landscape with Aeneas at Delos represents Diana and Apollo slaying the giant Tityus, who tried to ravish their mother.
Landscape with Aeneas at Delos is one of the most evocative paintings Lorrain ever painted. The figures, elongated perhaps in the belief that the ancients were taller than we, are dwarfed by the sacred trees and the majestic buildings. Apollo's round temple recreates the original appearance of the Pantheon, reminding us of the Delian oracle's prophecy of Rome's future splendour. Meditation on time is at the very heart of the painting. A dual longing, for both the Trojan past and Aeneas' future as founder of Rome, is embedded in the perspectival construction. The projecting lines of the architecture in the Landscape with Aeneas at Delos meet at the level of the horizon to the left of the canvas, while the lines of the road converge to the right.