Seaport with the Embarkation of the Queen of Sheba, 1648 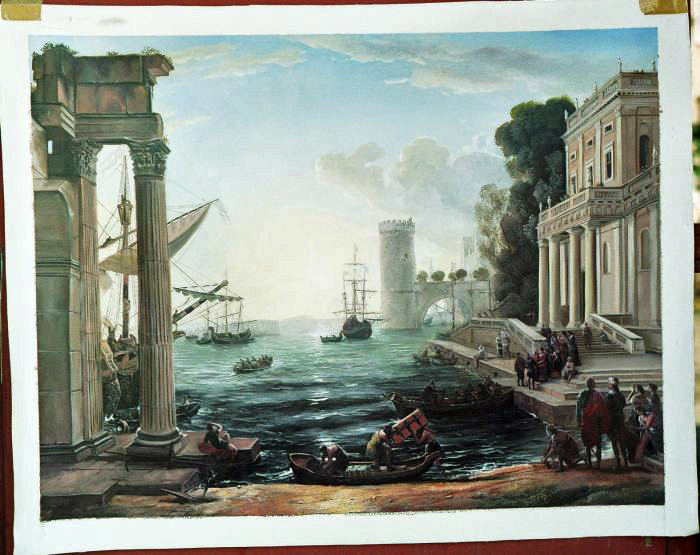 OIL PAINTING:  Seaport with the Embarkation of the Queen of Sheba, 1648       When Claude Lorrain arrived as a boy in Rome from his native Lorraine, perhaps to serve as a pastry cook, landscape painting was already a recognised speciality. Claude, however, was to surpass all previous practitioners. His poetic reinventions of a Golden Age, appealing to a cultivated aristocratic clientele, were assembled in the studio from drawings made out of doors in Rome and the surrounding countryside and in the Bay of Naples. The German painter Sandrart, who accompanied him on sketching trips, described his procedures:
[Claude Lorrain]...only painted, on a small scale, the view from the middle to the greatest distance, fading away towards the horizon and the sky... [he is an example to all] of how one can order a landscape with clarity, observe the horizon and make everything diminish towards it, hold the colouring in proportion with the depth, each time represent recognisably the time of day or the hour, bring everything together in correct harmony by accentuating strongly the front and shading off the back in proportion...
Lorrain's influence indeed became all-pervasive, most of all in eighteenth-century England, where it affected not only painting and collecting but the very ways in which real landscape was viewed and artificial parkland constructed.
Like many of Lorrain paintings, the Seaport with the Embarkation of the Queen of Sheba was conceived as one of a pair; its companion, the Landscape with the Marriage of Isaac and Rebekah ('The Mill'), is also at the National Gallery. They were commissioned by Camillo Pamphili, nephew of Pope Innocent X. Before the exceptionally large canvases had been completed, Pamphili renounced his cardinal's hat to marry and was expelled from Rome in disgrace; the paintings were finished for the Duc de Bouillon, French general of the papal armies. Both relate (through inscriptions, our only clues to their subjects) to stories from the Old Testament - thought at the time to be especially suitable for the pictorial decoration of cardinals' palaces - on the theme of love, or esteem, between men and women, and recounting fateful journeys. While most contemporary churchmen would have interpreted the tales as symbolic of Christ's union with the Church, Pamphili may have wished to refer covertly to his own love for Olimpia Aldobrandini.
Claude Lorrain follows his usual method of simultaneously harmonising and contrasting the two paintings : the Marriage of Isaac and Rebekah is a landscape in late summer afternoon, the Embarkation a coastal view, depicted in early morning light like all of Claude's Embarkations. The Queen of Sheba's land journey 'with camels...and very much gold' to visit King Solomon (1 Kings 10:1-2) is transformed into the viewer's own imaginary voyage, leaving harbour to sail on the open sea towards the light. (The queen, a small figure in red, descends the stairs to be rowed out to her vessel moored on the horizon.)
Including the sun within the Seaport with the Embarkation of the Queen of Sheba was Claude Lorrain's greatest early innovation. Exactly half-way up the canvas in this stateliest of his seaport compositions, it is the basis of its pictorial unity, all the colours and tones adjusted in relation to it Claude's palm and finger prints can be seen in many places in the sky where he smoothed transitions from one passage to the next. The boy sprawling on the quay-side shields his eyes from its dazzle, and its rays gild the rounded edges of the fluted column and Corinthian capital beside him.